I never know where to begin after not writing for so long, so how about I begin with today, and I’ll work my way back to where I left off.

It is February, and I am in Fort Myers, Florida, after recently relocating after close to two months in Albuquerque, New Mexico. I am back in America for another (much shorter) contract, doing aerial survey in a little Cessna 172.

While in Albuquerque, in my free time, I decided to upgrade my skills to broaden future job prospects. I passed my commercial multi-engine check-ride in late November. Now I can legally work as a commercial pilot flying planes with more than one engine. Whether I ever will is another story.

With just a little over 2 weeks left in my contract, I’m more than a little excited to be going home. Yes, home to Scotland.

Let me take you back to when I last went home following my other contract, after 9 solid months away.

When my contract ended June 30th in Syracuse, New York, I was on a commercial flight within 5 hours, Scotland-bound.

Luckily, there were fewer than a half dozen folk on the final Glasgow-to-Stornoway leg of my flight, so I didn’t have to trample too many people as I eagerly made my way to the Arrivals lounge, where a handsome Scotsman was waiting to usher me back to the croft in Achmore. It’s the greatest feeling, coming home to the one you love, who’s waiting for you at the end of the line, where you know you belong. Home sweet home.

It was quite exciting to see the progress on the house, after being away for 9 months. Billy had the plans in the works well before we met, and he had just laid the foundation a couple of months after we met. Now the walls were up, roof installed and much of the stonework and Scottish larch siding was complete, as well as the hurricane-proof giant picture windows framing the spectacular view of the Harris hills. 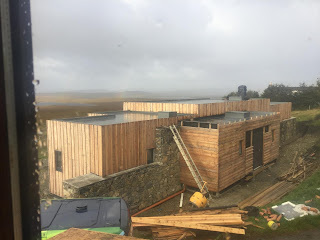 We have a small flock of Hebridean sheep, and all the ewes had lambs in the spring, who were over a month old by the time I got back.
Within hours of being back on the croft, I was out in the fields helping to herd them for various necessities, including hoof-clipping, shearing, and medicines. 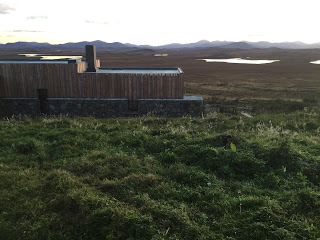 One lamb decided she wasn’t too keen on any of that, and when cornered, launched herself over the fence onto the neighbors croft. A sheep dog might have been helpful, but as we don’t yet have one, Billy and I got a weeks worth of exercise running up and down the croft, trying to encourage her through an opening in the fence we made. At one point the lamb seemed to think she found one of her own when faced with one of the cows belonging to our neighbours. She toddled up with a hopeful gait, but when the bull turned around and made a motion to charge, she realized her mistake, and was once again top-speed for the bottom of the croft. It was well after dark when Billy finally managed to reunite the lamb with her mom.  There’s nothing quite as heart wrenching as laying in bed on a quiet night, listening to a lamb crying for it’s mother. 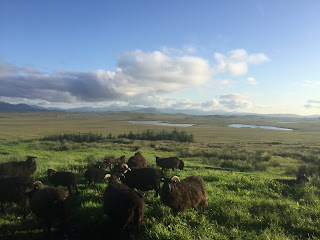 When I arrived back, the coming months still carried a certain amount of uncertainty, so we were determined to make the most of the summer.  The weather gods did not make this easy on anyone during the Hebridean summer of 2019. As Billy said, it will be remembered as the Summer That Never Was. The running joke was that it only rained twice, once for 47 days, and once again for 43 days. Despite this, we managed a few overnight trips in the camper van, sadly only one dip in the ocean at Tolsta Beach, to try out my new wetsuit (the waters may appear tropical, but don’t be fooled), though Billy was able to get in a few dives in nearby lochs where he enjoys snorkeling for Viking gold (seeking, not yet finding). My main project I had assigned myself was to build a chicken coop. I’ve been wanting to keep chickens for quite a few years now, but life aboard Annie Laurie was hardly conducive. Now with the time, and the perfect setting for free-range chickens, and some leftover lumber from the on-going house build, as well as pallets collected from around Stornoway, construction began. I cannot hide how pleased I am with the finished product (in Scotland, you might say chuffed).  I didn’t have plans per se, I just made it up as I went along, and took some inspiration from our architect-designed house as well. On October 1st, our first five tenants, pullets (teenage hens) from the Isle of Skye, moved in. 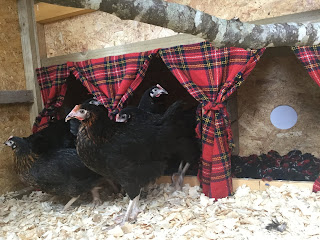 To say they moved in would be to stretch the truth a bit, at least for the first couple of weeks. I still don’t know why, but despite a warm, clean, cozy, inviting coop awaiting them as darkness fell each evening, the five of them would just huddle outside the door, at the top of the ramp, but would not go inside. Bitter north wind, sleet, driving rain.... it mattered little. They were not going in the box.

After picking them up one by one, and locking them inside for 24 hours, as advised by other experienced chicken keepers, they realized that was their sleeping quarters, and they now happily put themselves to bed each evening at sundown, marching in a row up the ramp, and popping through the door one at a time. 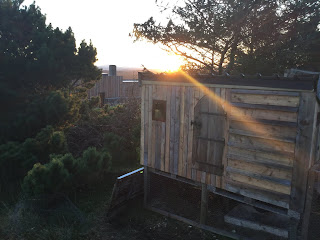 At this point you might be wondering if a chicken coop was my biggest news since my last update. It might have been, if it wasn’t for Billy taking me for a Saturday spin out the road to the nearby Callanish Stones on October 5th, when, with a beautiful antique diamond ring kindly gifted from his dear friend Nan in America, amidst the 5000 year old standing stones, Billy got down on one knee.

It would be a short engagement indeed, as we were married two weeks later in a simple ceremony on the balcony of the town hall in Stornoway on October 18th. It was simply perfect, and perfectly simple, surrounded by his family and friends, as well as my good friend Louise and her family who came up from Stirling, which meant so much to me. We were incredibly lucky with the weather, after such a miserable summer, as the sun shone through, and the temperature was mild. After a quick trip to Tesco’s in our wedding dresses (so funny, right?) for supplies for the evening pizza party (Billy’s favourite), we stopped by the Lews Castle grounds as well as back to the Callanish Stones, for some photos. A small and casual party in the loom shed back on the croft ensued.  Chrissy also surprised us with a beautifully detailed wedding cake, having made it herself after our late-morning ceremony, complete with a Hebridean sheep, chicken, the Scottish and Canadian flags, along with Billy and I, including the details of our attire that day.  We were touched.
I’ve never been much of a planner, as anyone who knows me at all can attest, but despite the minimal planning involved, I’m pretty sure a good time was had by all, and the day as a whole was virtually stress-free. I think we should get married every year. 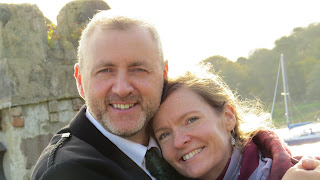 As one of my brothers pointed out, and rightly so, many newlyweds might take a week and honeymoon, together, in Rome, Italy. Instead, a week after our wedding, I would be back at work, alone, in Rome, New York.

It’s all a part of a bigger picture, though. We do what we need to do in the short term, and one of these days, when I go home, I’ll be there to stay.

Written In Water: An Uncharted Life Aboard a Wooden Boat, Available in Paperback or Kindle